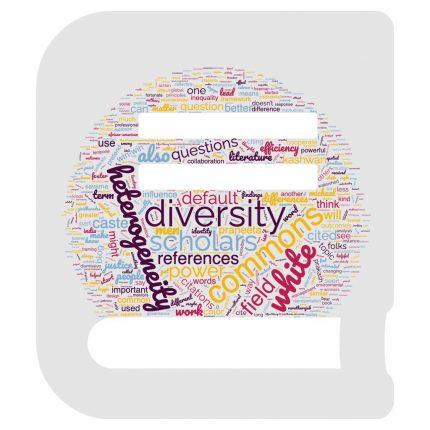 The In Common Blog

The lack of diversity in commons citations

The following is a dialogue between Michael Cox and Praneeta Mudaliar about their experiences and thoughts regarding citation practices and diversity. Michael and Praneeta are grateful to Hita Unnikrishnan, Prakash Kashwan, Divya Gupta, and Mike Schoon for their helpful feedback on this blog entry. We plan for this to be the first of several In Common blog posts on these topics.

Michael: A few years ago, I started to pay attention to the identities of the authors that I assign to my students, and one could say that I shouldn’t have been surprised when I discovered that my references were made up of mostly white men. I have come to see this as a center of gravity that pulls in this direction: it feels like the default outcome if I don’t pay attention. In my academic writing, this has become a continual back-and-forth: I will explicitly think about the diversity of my references, and then I’ll stop, and suddenly, I will have cited five white men in a row, and the people they are citing are mostly other white men. White men all the way down, as it were.

This raises a lot of questions. Why is that a default, or maybe why is it my default; why does it matter; and what to do about it. To start to answer my own default question, I think this obviously relates to my own identity as a white American man. This default also probably relates to the kinds of questions that I’m asking which will lead to some literature more than others, with presumable consequences for the folks that I will be citing. And then there are questions of the “Matthew effect”, or what I believe sociologists refer to as cumulative advantage: if you get a head start, this snowballs and sooner or later you are cited now mostly because you’ve been cited before. We all know this happens but also kind of pretend that it doesn’t. As to why it matters, a part of the answer is that (1) citations matter as a marker of professional success and criterion for professional advancement, and (2) my experience is not idiosyncratic, but representative of large-scale inequities in who gets cited and who doesn’t (Kwon 2022).

Praneeta, I’m interested in what your experience has been in this regard?

Praneeta: Growing up in India, it was impossible for me to separate out the influence of caste on my social milieu, either through the visibility or invisibility of caste. It was obvious that caste also shapes collective action outcomes, and yet I could not find literature and references on the commons field that could confirm my thoughts. The only references that I found on inequality were by white scholars and/or upper caste Hindu savarna scholars (Soundararajan and Varatharajah 2015), except that the references did not mention inequality, but called it heterogeneity. The term “heterogeneity” results in an assumption that power relations among people are equal or neutral. Having white and savarna scholars dominate the field meant that questions of inequality and justice were not being studied. The default then was to cite the work of white and savarna scholars. However, two key references, both by scholars of color, Sheila Foster and Prakash Kashwan, shaped my research trajectory (Foster 2002; Kashwan 2016). Their work gave me the theoretical language to anchor my findings. For instance, Sheila Foster’s work helped me better develop connections between environmental justice and the commons. Through Prakash Kashwan’s work, I learned that patronage, alliances, and personal obligations related to institutions and hierarchies of race, gender, and caste influence interactions among community members governing the commons.

Why does diversity matter? If I ever summoned up the courage to speak with white scholars from the commons field, I was paternalistically told that “it’s an important topic, but what about efficiency?” or “power is not really compatible with the Institutional Analysis and Development (IAD) framework”. The IAD framework, developed by Elinor Ostrom and her colleagues, is the dominant framework in the commons field to explain and predict outcomes by exploring governance structures, formal and informal institutions, and actor positions. The message that I received (even if it was not intentional) is that there are other questions more important than diversity and justice in the commons. Perhaps, if the commons field were more diverse, as a student, I could have seen myself in others and received the validation that my work is significant.

Your realization of how white men tend to cite other white men also speaks to the politics of citations. This has been an ongoing conversation on Twitter around this topic. Women, scholars of color in the global North, and people from the global South tend to get cited less (Kwon 2022). In response to your question about why the default is to cite white men, I agree that identity and the kind of questions one asks could lead to a selection effect on the kind of literature with which one engages. But that’s just one part of the story. I also see that even if scholars of color have been working on the same topic, they are not cited. If we are not citing people of color, the default will be white citations by white people resulting in a very white and upper caste commons field where only certain kinds of questions are studied and considered worthy of investigation.

This leads me to ask something I have been mulling over for a long time now: why are there so few African American researchers in the commons field? I hardly see any African American or Indigenous peoples, students or faculty, from North America at academic conferences. What am I missing?

Michael: There is a lot going on here…to pick up one thread, I agree with you that the term “heterogeneity”, particularly as I have seen used in the commons field, masks difference in identity and power. Although I have seen it as a way to try to represent difference, it does so in a very specific way, viewing heterogeneity as another independent variable that affects the ability of a group to cooperate. And greater differences can make it more difficult to cooperate. But more recently I have also been thinking that the differences in power and influence can be so great that it doesn’t make as much sense to adopt the traditional “collective-action problem” framing that dominates much of the literature on the commons. This framing supposes a possible win-win outcome can be achieved, which might make the powerful feel good, because it means that they can help the less fortunate without sacrificing their own standing. But if a win-win isn’t possible, it means that the more powerful actors have to sacrifice something, which we want to pretend isn’t the case. I’m directly channeling a recent book that I read called “Winners take all” by Anand Giridharadas (2018), who makes this point across multiple sectors. A question that comes to mind then is, does this affect our understanding of diversity? Is this also treated as a politically neutral word, conjuring up win-win scenarios, when it also is about changing power and influence? How is diversity similar to or different from heterogeneity?

In the same vein, a similar critique can be leveled at the word “efficiency” that you mentioned. This is an important and often problematic word that I see used to invoke a tone of technical expertise that isn’t swayed by emotion or context (and in so doing I think play on a stereotype of unemotional and therefore rational masculinity). The false dichotomy between efficiency and equity has always bothered me: “well, we could help others, but that would be less efficient” based on a definition of efficiency invented by the more powerful. Efficiency simply means maximizing output over input. Saying anything beyond that is at least somewhat normative. Do we want efficient markets? Maybe yes, if say we are talking about a labor market that allocates jobs to those who are most “deserving” or the “best”, but then what do these words mean? You can’t pretend that it is a politically or morally neutral exercise for very long.

As a start of a response to your final point, I think we do need to be coming up with concrete strategies for promoting more diverse referencing practices, which is in part why we are working on a database that folks could use to find literature written by a variety of different authors. But it could also be helpful to brainstorm the best rhetorical ways to engage with folks who are dismissive. I think that will have to wait for another blog post though!

Praneeta: How is diversity similar or different from heterogeneity? I love this question! I never explored this question but have always felt that there is an inherent tension in the way we use these words. While we might interchange temporal and spatial heterogeneity with temporal and spatial diversity, or socio-cultural heterogeneity with socio-cultural diversity, we only say biodiversity but not bio heterogeneity. It makes me wonder why the commons field started using the term heterogeneity and not diversity. It is interesting that findings from the commons field indicate that socio-cultural and/or economic heterogeneity might prevent win-win outcomes i.e., greater differences are linked to win-win outcomes, but when we use the term “diversity,” findings from a range of fields such as education, ecology, governance, business, suggest that greater diversity leads to improved performance, more creativity, unique perspectives, more innovation, better collaboration, and better decision-making. What is it about managing the commons that some differences might make it difficult to cooperate, but differences in other contexts lead to creative, better collaboration, innovation, and the other benefits of diversity? And what about moderating factors? For instance, a recent line of inquiry suggests that groups with cognitive diversity might perform better at solving sustainability challenges when the participants have high general intelligence and social intelligence (Freeman, Baggio, and Coyle 2020). We know that words we use do matter because when scholars used the term “inequalities” instead of “heterogeneity,” they found that unequal power dynamics lead to coercive cooperation (Kashwan 2016; Mudliar and Koontz 2021). Another difference between these words is that diversity is used to refer to representation, but we do not use heterogeneity in the context of representation.

Developing a database to promote diversity in our citations is a fantastic structural intervention. Brainstorming ways to engage with dismissive folks is equally important because scholars might not know how to productively respond to dismissiveness, especially when it comes from senior, well-established scholars. What has helped me is having supportive and trusted mentors with whom I could discuss these situations without the fear of backlash. While not everyone will be fortunate enough to have such mentors, we need scholars to reflect on—and be mindful during interpersonal interactions. There is much work to be done here.

Giridharadas, A. 2018. Winners take all: the elite charade of changing the world. Alfred A. Knopf.

Soundararajan, T., and S. Varatharajah. 2015. Caste Privilege 101: A Primer for the Privileged. https://theaerogram.com/caste-privilege-101-primer-privileged/.