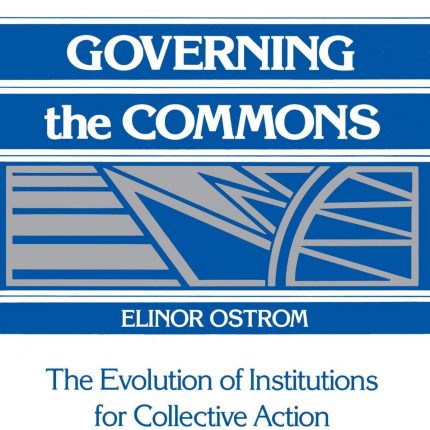 This is the first of a series of posts on the meaning of the design principles which aims to provide general guidance for operationalizing the design principles for research on the governance of social-ecological systems.  The posts will adopt a common structure to provide definitions through my favourite of all methods (copy and paste from existing sources), describe the theoretical mechanisms that underlie their importance to sustainable environmental governance, and then turn to how they might be measured in primary and secondary research.  I will then conclude each post with some concluding thoughts on the design principle, highlighting issues, challenges or points of concern that have been raised by researchers.  Lastly readers should also note that these posts are a representation of my own perspective on the design principles, including recollections of the literature and projects that I have been involved with, and are not necessarily representative of how all commons scholars interpret and understand the design principles.  I hope that if you disagree or have something that might clarify anything that I post here that you reach out and we can either edit or add comments to each blog post to help those interested in incorporating the design principles in their research.

The first design principle, social boundaries (1A), asserts that groups are more likely to sustainably manage common-pool resources when the individuals or households that hold rights to use/harvest/appropriate resources are well defined by formal and/or informal rules.  The definition of the social boundary principle was revised slightly in 2010 by Michael Cox, Gwen Arnold and Sergio Villamayor Tomas in their review of the design principles to clarify their distinctiveness from resource boundaries.

Individuals or households who have rights to withdraw resource units from the common-pool resource (CPR) must be clearly defined, as must the boundaries of the CPR itself

First and perhaps, foremost, it is important to note that all of the design principles relate to rules-in-use (rules that are recognized by individuals as applicable to a particular situation or context) and not rules-in-form (i.e. laws, regulations, policies).  Rules-in-use does not imply that rules are accepted or followed but simply that most individuals are aware of their existence and feel some obligation to follow them (even if many do not).  In some cases, rules-in-use may be the same or at least broadly similar to rules-in-form.  Identifying rules-in-use can be challenging and often requires engaging individuals and households to gain a better understanding of the rules that they believe apply to them, and/or observing their behaviour and asking questions to ascertain whether their actions are a reflection of an individual strategy (or habit) or instead an informal rule.    Second, the social boundaries principle refers specifically to the right of individuals or households to withdraw, harvest, appropriate or more generally use a common-pool resource, and not rights related to access, management, exclusion of other groups or the sale of those rights to other actors.

The importance of the social boundaries principle stems from its ability to generate incentives for actors to invest in the sustainable management of resources by internalizing the costs and benefits of resource use.  More generally, clear social boundaries define a set of individuals or households who are eligible to harvest resources and by extension limits the rights of other individuals or households to do the same.  For actors with harvest rights, clear social boundaries generate a general expectation that they are (more) likely to enjoy long-term benefits from efforts to maintain sustainable levels of resource use and investments in the management of those resources.

The challenge in measuring social boundaries stems from a number of factors.  First like all design principles there is an inherent tension between observing systematic patterns of behaviour among a group of actors that MAY be an indicator of a formal or informal rule, and evidence of rules that generate those systematic patterns of behaviour.  For instance, one might observe that all or most resource users within a community are members of a particular social or economic class.  Although this might indicate the presence of a social boundary rule, it could also result from a range of other social, economic and/or political processes.  As a general rule it is important to maintain the distinction between rules and the behaviour they help to influence.  However, observations of systematic patterns of behaviour should not be ignored, but rather should be further explored through interviews and questionnaires to determine whether there are rules that are generating these patterns of behaviour.  The second challenge meanwhile stems from the wide range and diversity of ways in which social boundaries can be defined.  These can include, amongst others, restrictions based on the location of actors (i.e. members of the local community), their socioeconomic characteristics, possession of license or payment of a fee.  As a result, it may be necessary to use several measures, and/or ask a series of probing questions to determine whether social boundaries are present or absent within a particular case.

The following sections provide very brief examples of the types of questions I might ask myself or research participants in field research and while coding secondary data.  Field research questions are often adapted for different sectors and/or local contexts to facilitate data collection.  This may lead to improved measures within cases or studies, but create challenges for empirical synthesis.  The questions and text examples for the secondary data example are drawn directly from a codebook and coded cases from the Commons Synthesis Project, involving myself, Jacopo Baggio, Joshua Lambert, Jennifer Obado Joel and Felicia Gordian at the University of Central Florida.

While individuals in nearly all households (sixty) mentioned that outsiders were not allowed to harvest products, they did not indicate knowledge of such rules restricting community members

Access to the fishery is both free and open. Although the municipality administers the area and requires a license fee and permit, municipal officials do not strictly enforce the law and users do not pay

Some still believe that everybody “can graze his cattle and is free to move anywhere.” There are no enforceable rules of access to rangeland among the Fulani

The social boundaries design principle (1A) appears to enjoy fairly robust empirical support.  In fact, some researchers might argue that social boundaries are one of the critical characteristics that distinguish a common property rights regime from open-access conditions.  However, there are at least two important issues or caveats that have been raised with respect to social boundaries.  First, groups exploiting resources with high levels of spatiotemporal variability or uncertainty tend to benefit from fuzzy boundaries that allow them to cope with this variability and avoid degradation of resources.  Second, social boundaries can be problematic from a normative point of view as it necessarily implies a group of actors that are permitted to harvest resources and another group that is excluded from doing the same.  As a result at least in some cases the social boundaries that serve to support sustainable community-based management may contribute to the further marginalization of some groups.